Lamar Jackson, the name that has everyone talking. All social media and every other platform where the NFL resonate went crazy last Sunday. All took place when Baltimore Ravens’ Lamar Jackson achieved an unbelievable videogame-like maneuver against the Cincinnati Bengals. Jackson delivered an incredible l performance. It did not only set him up as a solid MVP runner, however, but he will also go down in NFL history for this achievement. 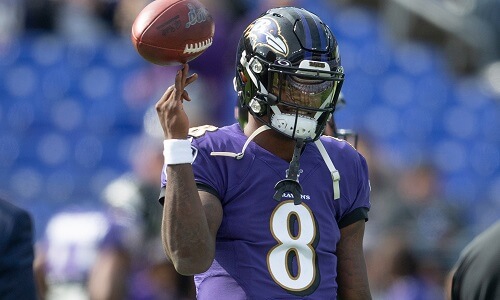 Bengals Have A Hard Time Dealing with Jackson

The Bengals defense was falling victim to a 28-10 lead in the first half. Then, Lamar Jackson baffled them with a 47-yard touchdown. The amazing play comprised of running off a tackle, and easily breaking through the first level of defense, performing an overwhelming highlight-reel well-intentioned spin move, and fast-moving into the end zone.

Lamar went on to finish the match with a faultless passer rating. Making him the first player in National Football League history to put up a great passer that rates twice in the same season. There shouldn’t be any doubts anymore left about Jackson’s ability to play against the QB at an NFL level. Fans can now eye him as a very serious MVP contender this year. The 22-year-old Lamar Jackson currently owns an awesome signature move and leads the Ravens in a 7-2 season. Including his wins over the Seahawks and Patriots.

The Ravens will host the Texans during week 11. The Ravens are favored (-223)  by 4.5 (-110) points against the spread (ATS) over the Texans. This translates into greater chances of winning the title.