The Hornets are in a good vein of form. They won four of their last five matches and scored 11 goals in that time. Before this run, Watford won only once all season and they looked very ready for relegation. It was a 2-0 win over Manchester United before Christmas and that has pushed them on, and they still haven’t looked back. Captain Troy Deeney’s return from an injury gave the team a boost. He put in a man of the match performance in the team’s 3-0 win over Bournemouth. The Frenchman Abdoulaye Doucoure upped his game in recent weeks and he has now become the clubs second highest Premier League scorer with 16 goals. On the other hand, Tottenham is a team that seems to be in disorder. Mourinho hasn’t established the ship much since his take over. Also, the London side is sliding down the table. They got outplayed in their 1-0 loss to Liverpool and were outmuscled in their 1-0 defeat to Southampton the weekend before. Scoring is becoming a challenge for Spurs, and the loss of Harry Kane is a real concern. 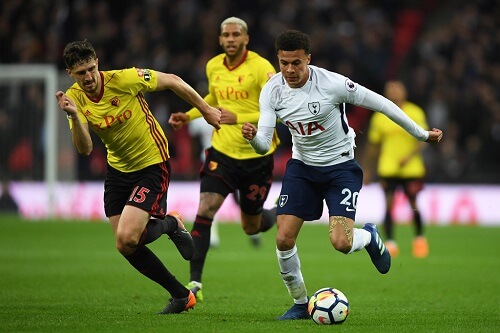 Watford manager Nigel Pearson has injuries to struggle with. Moreover, Christian Kabasele will be missing out again as he is still serving his final game suspension. The English midfielder Tom Cleverley is still out for a couple of weeks.  Will Hughes, Kiko Femenia and Sebastian Prodl will also be watching from the side-lines due to injury. Mourinho’s journey as Tottenham Spurs’ boss hasn’t been easy. Harry Kane’s wound will make it even harder going forward. His star forward is out until the end of April, this means Spurs has no striker.

On the form, it’s hard to consider supporting Spurs to get a win, therefore the odds of 6/5 (2.2) don’t really hold much value. Watford is full of self-assurance and Pearson has a good choice of attacking choices.

Tottenham kept only two clean sheets all season – the joint-worst record in the league with the basement club Norwich. Additionally, they have scored 20 goals in Mourinho’s first 13 matches in charge. it took 44 matches for the manager to reach that number with his first Chelsea side. They also failed to score in back-to-back matches.