WNBA, The Women’s National Basketball Association is a skilled basketball league based in the US. The league was established in 1996, as the women’s counterpart to the National Basketball Association (NBA). The league then began to play in the year 1997. It currently consists of twelve teams. Betting options for WNBA basketball are similar to any other basketball league (College Basketball or the NBA). The popular way to wager is on the point spread, however, a lot of handicappers like to gamble on the money line and/or total. Prop bets and Future bets can be placed as well. We have compiled a full WNBA betting guide for both novice and existing players to catch up on. Read on! 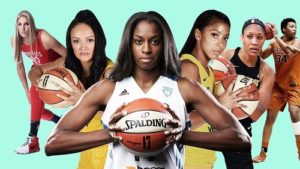 Where to place your WNBA Bets Online

Basketball matches are handicapped by totalling or removing points from the squad scores. Favoured teams have to give up their points, while underdogs are getting points. In numerous games, the handicap gives bettors a chance to get in the -105 to -110 range on whichever side.

Money line bets are also known as straight-up bets made on which club will win the match, without point spread involved. Instead of receiving or giving up points, punters get odds that reflect on the favourite and the underdog.

Totals bets are easy bets that are based on the joint score of both teams throughout a game. A score of 75-70 will have a total of 145. For every game, sportsbooks set a number of the total (which is also called over/under). The bettor’s job is to guess if the total score will be high or low.

Futures bets are bets that guess the Eastern & Western Conference Champions, or even the WNBA Winner. Most sports betting sites offer them in advance of a season taking place. Also, they cut them off soon after the season has started.

Proposition bets are any type of bet that doesn’t fit into any of the gambling categories listed. They’re designed for unplanned bettors that only want to have fun. Some WNBA prop stakes include: 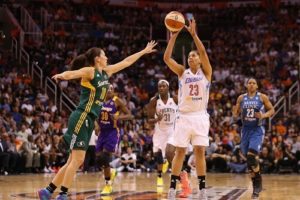