It is confirmed that the 2019/20 Premier League season will start on the 17th of June 17, 2020. There hasn’t been any action since the beginning of March. The whole reason being the world pandemic. However, the Premier League is now gearing for its return, with all the20 clubs having to welcome their squads back to training and also setting a date for its recommencement. 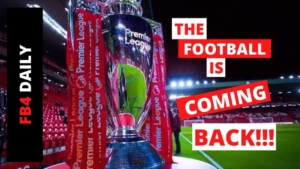 When is the Premier League Football resuming?

‘Project Restart’ was originally planned for June 12, however, clubs have voted on Wednesday, June 17 for the season to start – subject to meeting all the safety requirements.

Aston Villa will be hosting Sheffield United on that date, and Manchester City will be hosting Arsenal. Those are rearranged matches, and this will mean all the 20 clubs have played 29 games heading into the weekend of June 19-21. Players are back in training since May. Strict social distancing guidelines were put in place, but clubs have then voted to reinstate contact training.

There are 92 games still to play in total and all matches will take place behind closed doors. They are to be played at the clubs’ stadiums as normal though it is understood neutral locations could be used for some ‘main matches’ to prevent the breaking social distancing guidelines.

This may include Liverpool’s trip to Everton and Manchester City, also other big occasions like major London derbies.

A league statement on venues read as follows: “The Premier League’s drive is to complete all remaining fixtures this season, both home and away, where possible.

“We are working with clubs to ensure risks are being assessed and minimized, while also cooperating with the police at a local and national level.