Bills Vs Cowboys will be going head to head on Thursday 28 November 2019.  The match will take place at AT&T Stadium, Arlington at 4:30pm EST. For having the most volatile offenses in the NFL, the Cowboys move as fast as your turkey-stuffed Uncle Ray in the opening frame. Dallas averages only 3.6 points per first quarter on the season. They have been beaten to the punch on the scoreboard in about eight of its 11 matches so far. Buffalo isn’t any better in the first 15 minutes, they also put up only 3.6 points on each first quarter, however, they have jumped out to the early lead in five of their last seven matches. The Bills rank fifth in first-quarter points against, letting only 3.2 on the year, while Dallas gives up an average of about 6.3 points in their opening stanza. 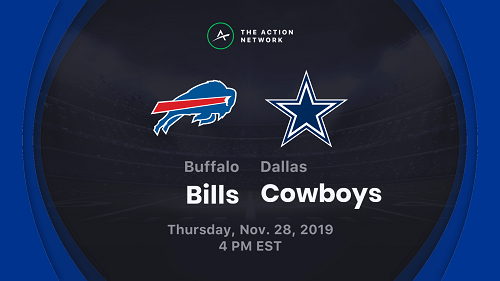 The First Half Wager

The Cowboys come from a very tough loss at New England in Week 12 in which the offense popped against the Patriots’ top-ranked defense. However, also against the elements.  Come Thursday, the weather will be good. No rain or wind inside Jerry’s World. Nonetheless, the team could be a bit flat in a possible let-down spot on the short week. Dallas has key bodies that are banged up on the offensive line and which could slow down the production even more in the first opening half against Bills stop unit giving about 7.3 first-half points per game.

Frank Gore might have gotten the spotlight in Week 12, moved up to third on the NFL’s all-time rushing yards list. However, it was his young counterpart in the backfield that has punters eyes on in Week 13. Devin Singletary, Rookie rusher, is pushing Gore aside in terms of touches, recording 36 carries in the past two matches which equalled 181 total yards on the ground. Over the last four matches he had, the little back from FAU now has 318 total yards and went for 75 or more in three of the outings. Dallas’ run stop permitted Patriots RB Sony Michel to go for 85 yards on 20 touches and ranks number 17th in rushing defence DVOA at Football Outsiders.

This 45-point Over/Under is the highest total Buffalo that has been pegged with all season. The Bills enter the Thanksgiving this Thursday with a 3-8 Over/Under record on the year, however, they haven’t played an offense such as this in a very long time.