A powerful volcanic eruption rocked New Zealand’s White Island, a small unoccupied volcanic island sticking up out of the sea in the Bay of Plenty, about 50 kilometres offshore of the country’s North Island. Even though details are currently sparse, the New Zealand police force suspects that less than 50 people were on the island when the eruption took over by surprise. several people have been reported injured, some allegedly with serious burns, and some are evacuated to the mainland. At least about seven people are critically injured. Numerous people on the island are at present unaccounted for. Five people have been reported dead. Also, it is said that the number could go up as time goes. Most news reports focus mainly on those injured by the eruption, and reasonably so. There is scientific information that provides some background as to why this happened. 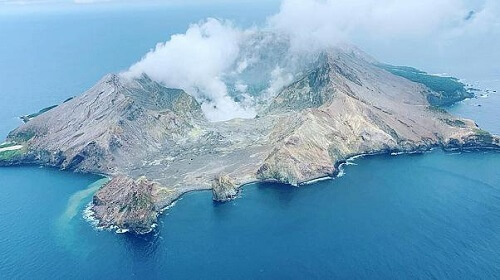 On Monday, December 9th around 14:11 in New Zealand’s time zone, (late at night on Sunday, Eastern Time), an outburst took place at White Island, which is also known by its Māori name Whakaari. It has been described by GeoNet – an authorized scientific initiative that’s a collaboration that is between the New Zealand government’s Earthquake Commission and the New Zealand-based geoscience institution GNS Science – as an impetuous, short-lived occasion that has affected the crater floor. The activity appears to have reduced since the eruption.

It is still too early to tell what kind of an eruption it is at the moment. However, based on the dramatic event’s less duration, the fact that there have been some injuries on the site and that the temporary ash cloud fell mostly back onto the island submits that this was a kind of moderate volcanic explosion. Being close to the sea – the open vent is underneath sea level, just surrounded by the volcano’s rim – outside water might have penetrated White Island’s shallow lava supply.