The Nuggets are presently enjoying their third-longest win streak in the NBA. They also hope to take advantage in their season game series against the Western Conference-leading Lakers. Denver won four times in a row and comes off a dramatic win against the Spurs Monday, collecting from the 23 points behind to secure a 127-120 victory. After the struggle to find consistency on defence and offense over the season, the Nuggets are confident on both ends during their winning streak. They also possess the second-best net rating in the NBA. Jamal Murray’s appearance since his return has hurled Denver into the No. 1 rated offense over the past four games.  The match will take place on the 12tgh of February, 2020 at 10pm EST. the game will be hosted at Pepsi Center, Colorado. Find more about the game and the teams below. 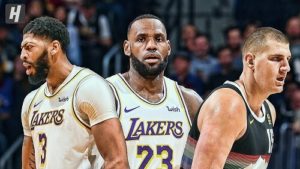 Lakers to Keep their Good Rhythm

After they lost against the Rockets and their setup, the Lakers bounced back to overthrow the Phoenix Suns with 125-100 on Monday night. The Suns tried the same tactics, however, this time the LAL was prepared for it. Anthony Davis counteracted the guests’ tries to misuse his height, while on the other side, Rajon Rondo gave an urge in the offense. The Lakers trusted Rondo during the trade deadline and it did pay off on. Los Angeles was in the draws for the former starting point guard Darren Collison, who eventually decided to remain emeritus despite being wined and dined at the Lakers home game. Rondo also proved that he is capable of being a 3-point shooter off of the bench, having knocked down a healthy 35.6 percent of his shots from long-range in this season.