Hearthstone is an online Trading Card Game that is made and owned by Blizzard Entertainment. The same firm owns more leading games such as StarCraft 2, Overwatch, and Warcraft. The games characters, cards, and the classes are based on the Warcraft franchise. Players get to face off in a variety of diverse game modes with most being of the Player vs Player variety. Betting markets range from Match Winner, Moneyline, Head-to-Head, Straight and outright markets. It is about which competitor will get to the final and which will win the tournament. Read more to learn about the game and where you can play it.

The game attracts a wide fanbase, bigger tournaments and brings a greater prize pool. It is expected that many companies adopt this into their even markets and also, it is expected that more unique gambling markets start to appear.

About Hearthstone – Know your Game

Hearthstone is one of the most popular video games that has turned competitive esport for embodying the classic saying, “easy to learn, difficult to master.”

The main aim of the video game is to reduce the opponent’s health scores to zero and to ensure the opponent doesn’t do the same to you. The game differentiates itself from the other top trading card games such as Magic the Gathering, YU-GI-OH, and Pokémon TCG in the fact it is completely digital and has no physical counterpart.

There are no cards that you can buy and collect in person. This allows fans of the game to exclusively invest in one type of card collecting whereas more other trading card games do try and play on both markets. Moreover, Hearthstone also uses online-only gameplay to differentiate itself by having the player pick a Hero that they feel represents them. These heroes are of different classes, and they have access to dissimilar cards and also unique class abilities. 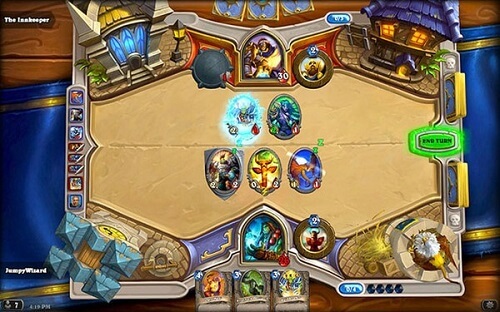 The game’s simplicity is confirmed in its rules. Every turn player has a certain mana pool, growing by 1 each turn. Cards that can attack and defend are known as minions and have a mana cost. They restrict overpowered cards from being played in the first turn.

Minions have an attack strength and also a health pool. With that, they can choose to attack another minion or even choose to attack the Hero directly. This may seem small, but it opens a great variety of strategic choices and tactics for the players.

Like all the competitive multiplayer video games that got into the esports big leagues, there is an important amount of game terminology that is employed by expert players. See below: