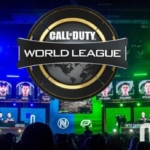 Call of Duty is the most popular annual multiplayer first-person shooter video game franchise in the world. Regularly selling over 20 million copies globally each year. There are hundreds of thousands of dollars in tournament prize-pools up-for-grabs available. To date there are dozens of organized CoD pro gaming leagues and tournaments being held in multiple countries. There are also top esports betting sites that you can place bets at. We cover all things Call of Duty and keep you up to date with the latest tournament schedules, game updates, betting predictions, terminology, and pools.

Betting on Call of Duty Esports

Call of Duty offers both single-player and multiplayer game modes, however only the end is naturally involved in the esports side of Call of Duty. What makes the franchise interesting compared to other esports is that it is an annual series, this means a new Call of Duty game gets released every single year.

CoD: WWII returns to a more traditional World War II-era realism, in that, there are no longer double-jumping or even wall-running mechanics for the players to use. There is a slide movement mechanic allowing players to slide to the ground or to leap forward to land on the ground for cover and safety.

CoD differentiates itself from other shooters for being class-based, this means players are able to customize the type of soldier they play.

About Call of Duty

Call of Duty esports was launched in 2007 with the release of Call of Duty 4:  The Modern Warfare, regarded to be the popular entry in the franchise to-date. Ever since, the competitive scene that surrounds the game got better organized and more lucrative, with about million-dollar prize pools being thrown around for the best CoD players.

Since the establishment of the Call of Duty World League in 2016, a series of regional qualifier events for the annual Call of Duty Championship series, which began in 2013.