The T20 series between India and South Africa is done with India winning 3-1. Now, the action is moving on to the ODI series as several acquainted faces are coming back come into the squad. South Africa won the last T20 match comprehensively. Will India women be able to continue with their dominance over South Africa women? Will the change in team arrangement hurt India as a number of their older players re-join the squad? Well, let’s watch and see. The game will take place at the Reliance Stadium, Vadodara on the 9th of October 2019. 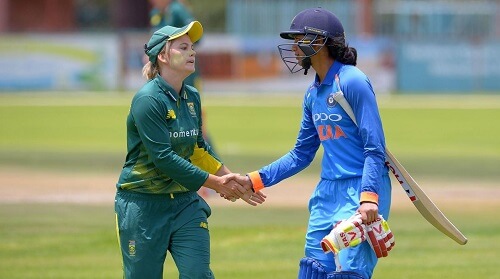 Mithali Raj will come back into the ODI side and she will try to make sure that India does not lose a beat while they switch formats. Three of India’s top batters will play in this format including Smriti Mandhana, Harmanpreet Kaur and Jemimah Rodriguez. Mithali Raj is a very accomplished batter and helps India to have a better fluttering side than South Africa in Indian weather conditions. Dayalan Hemlatha and Punam Raut also made it in the India squad however it remains to be seen if they make the playing eleven. In our opinion, we think that Ekta Bisht and Poonam Yadav are going to be the main threats to the South African batting. SA women will give India women a better fight in the ODI’s.

Conditions in Vadodara should be good for batting and so as the weather.

South Africa has an outstanding chance of winning the match due to its re-inforced batting line-up.