Churchill Downs is based in Louisville; Kentucky and it is home to the Kentucky Derby. Churchill Downs boasts more than 147 acres of space. The racetrack was named after Henry and John Churchill, who leased 80 acres to Colonel Meriwether Lewis Clark Jr. who was to build the racetrack. Churchill Downs opened its doors in 1875 with Clark as the leader of the Driving Park Association and Louisville Jockey Club. The racecourse was launched at a very good time. It replaced two Louisville tracks that closed shortly. The racetrack has been sold to a group of entrepreneurs who ultimately launched Churchill Downs Incorporated, with its name attached to several prominent gambling properties to date. 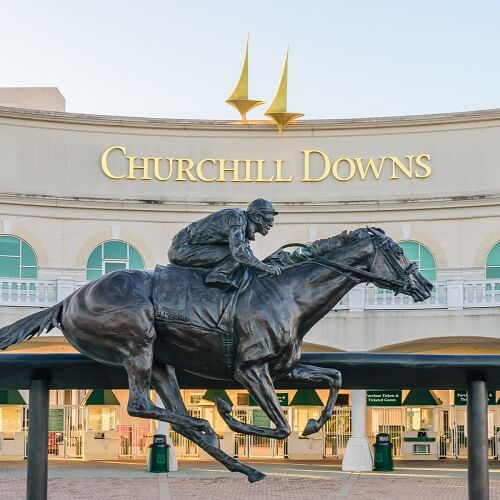 The iconic twin spires are based on the showboat custom-built in 1895, owned by William Applegate. It was planned and constructed by Joseph Dominic Baldez. The twin spires are one of the familiar architectural structures in horseracing.

In 1985, the Kentucky Derby Museum opened on the Churchill Downs property. The museum is good for those who fancy horse racing or horse gambling. Guests can tour the venue and view all the exhibits, including collaborating ones where they can also place faux stakes and watch the race. The gift shop is also full of great mementos and chances to take unforgettable photos. Between 2001 and 2005 Churchill Downs was renovated with a $121-million budget– which included renovating the twin spires, a brand-new clubhouse, and 79 luxury suites. All renovations were done while conserving the history and the feel of the venue.